A Guide to Using SparkPost with Node.js

As a Developer Advocate for SparkPost, I write a lot of sample applications. My background is mostly front-end development, therefore my strongest language is JavaScript. Thanks to Node.js, I’m a decent backend developer as well. Does this mean I’m a full stack developer now? Anyway, it was important for me that we had an awesome SparkPost client library for Node.js. So, I dove right in and became a contributor (even before I was hired).

Allow me to help you get started sending emails with SparkPost on your Node.js project.

I’m going to assume that you have Node.js installed. Because we follow the Node.js Long Term Support (LTS) schedule, you’ll need to be running version 4 or higher. You can see which version you’re running using the node --version command in your terminal window.

Let’s create a new npm project. If you already have one, you can skip this part.

This will create a new project and accept all the defaults. You can also instead run npm init and answer all the prompts.

Now we can install node-sparkpost:

Once installed you can import and create an instance of the SparkPost class:

It’s good practice to avoid putting your API key in code. We highly recommend storing it outside your code, so we set up the client library to detect the SPARKPOST_API_KEY  environment variable.

Now that you have a SparkPost instance, you’re ready to send. There are quite a few options available for sending, but let’s start with a simple example. Here’s how you send an email to a single recipient, specifying inline content:

There are more options available with transmissions, including specifying stored templates or recipient lists, cc and bcc, adding attachments, specifying a campaign, using substitution data, and much more. Check out the examples, docs for the Transmissions resource, and the Transmissions API documentation for more info.

Nodemailer is a popular library for Node.js that make sending email “easy as cake.” For those of you choosing to use this library, we created a SparkPost transport for Nodemailer. You’ll need to install the nodemailer  and nodemailer-sparkpost-transport packages in your project.

Now you can create a nodemailer transport instance:

Notice how I am reading the API Key from an environment variable. It’s still a best practice to never put that directly in your code.

There are several options that can passed into the SparkPost transport, like campaign id and whether or not the message is transactional. Take a look at the README.md for all the options.

Here’s how you’d send the same message above using Nodemailer:

We all know that email is king of communication but sometimes you want to be able to reach people via multiple channels. notif.me is a Node.js library for sending all kinds of transactional messages. Whether you want to send an email, sms, push, or webpushes, you can do it with ease. It also has built in fall and round robin strategies for multiple providers. We recently worked with the creators to build a SparkPost provider. You’ll need to install the notifme-sdk package in your project.

You can now create a notifme instance with the SparkPost provider:

Again, we are pulling the API Key from an environment variable. We’ve said it three times — it’s that important. 🙂

It’s really easy to use and I recommend looking at the other features.

There’s no wrong way to Node

When it comes to sending email using Node.js, you have many options. We’ve worked hard to help make it as painless as possible. If you run into any issues or have any questions, feel free to submit an issue on our node-sparkpost or nodemailer-sparkpost-transport github repos or join us on our community Slack team in the #node channel. I look forward to hearing from you. 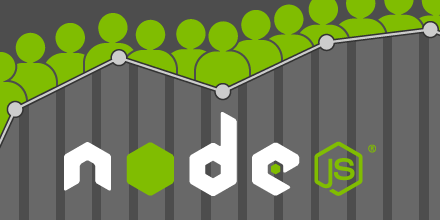 We broke down our Node.js client library and built it back up on top of a stronger foundation. Aydrian walks you through the updates, we hope you like it.

Getting Started with React: Angular Edition

Our developers recently had an opportunity to work on a greenfield project and chose to build it with React. Here's how they did it, what they learned, and what’s next.