In addition to iOs, Android and Windows, alternative mobile operating systems are beginning to gain visibility. Three were highlighted at the Mobile World Congress:

Firefox OS is battling it out as the most reliable alternative to Android and iOS. The last few months have seen the release of low-end devices under $100 in emerging markets. And Firefox OS came to MWC14 with more offerings for this sector. It seems they might have found their niche: emerging markets are theirs to conquer.

Mozilla is stepping firmly towards that goal: it announced a partnership with China-based chipset vendor Spreadtrum at MWC14 to deliver $25 smartphones. That would make it the cheapest handset on the market by far. Lowering the entry level of the global smartphone market can make Firefox grow from the bottom up.

Because Tizen is Samsung’s attempt to gain independence from Google, Tizen OS has great potential being under the umbrella of the world biggest handset manufacturer.

Tizen OS is putting lots of effort towards launching reliable wearable products running exclusively on Tizen OS (Galaxy Gear, Gear 2 and Gear Fit). They’re also attracting developers to create a sustainable ecosystem of apps. There was a large dedicated Tizen stand in MWC14, where some developers were demoing their creations for Samsung’s mobile OS.

The first devices that will officially run Ubuntu OS – formerly Ubuntu Touch – were demoed at the show.  These were through a partnership with Chinese and Spanish handset manufacturers Meizu and Bq, announced in time for MWC14.

GSMA Connected City: A glimpse of the future?

Tucked away to one side of Hall 3 was the GSMA Connected City.  Spanning the whole side of the large hall was a whole range of interactive demonstrations showing how cutting edge technology and connected solutions will become part of everyday life.

Showcased by AT&T, Deutsche Telekom, GSMA, KT, Vodafone and their partners, these demonstrations showed how their mobile technologies are powering economic growth and new business opportunities. Demos were in the areas of Education, Health Care, Identity and Security, Retail, Smart Cities and Industry, and Transport. 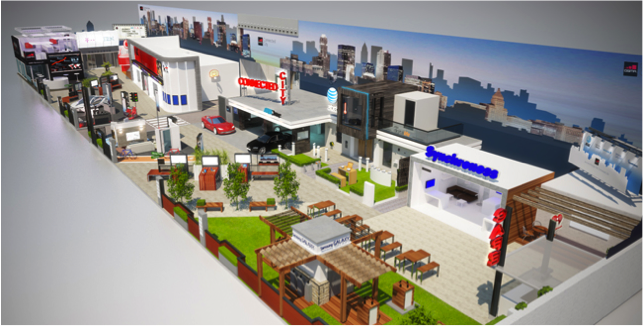 Like “location, location, location” is the mantra of the real estate industry, so is “engagement” for the mobile apps space.   One gigantic hall was dedicated to vendors in the mobile apps ecosystem.  Vendors spanned the gamut of games and gaming platforms, e-commerce and mobile payments, app development tools, app discovery “services”, mobile marketing and geo-location, advertising and ad-networks, SMS aggregators, network diagnostics , analytics,  and even an app for brewing beer (more on that later).

But the common thread across all these different vendors and technologies, is that mobile apps have value to both the end-user and the app owner – only if the app is being used.  And that is where engagement comes in.  The app owner has to get the user engaged with them – either through the utility the app itself delivers (for example, the ability to deposit a check for a banking app) or through some other value that the app provides (discount coupons that “magically” appears in the app while walking by a store).

With all the apps we have installed in our phones, it’s unlikely that we use all of the apps all the time, even when we perceive value in an app.  What brings us back to an app is an alert – a push notification telling us that something is new and to go check out the app.   Alerting users, as appropriate, through push notifications is what engages users and keeps them using the app.  And helping with mobile engagement is exactly what Momentum, our digital messaging platform (with push notifications) does.  So perhaps it might be a good idea for us to play with all the other vendors in this Hall at next year’s Congress!

Find out why the world’s biggest senders like Facebook, LinkedIn, Twitter and PayPal are using Momentum in the webinar, Your Mobile Customer Is Ready To Engage – Are You?