5 Ways to Optimize Your Financial Services Emails for Mobile Devices

Mobile devices account for 42% of email opens, according to a Litmus analysis of 10 billion email opens. In addition, Litmus found that 61% of emails opened on mobile are read for more than 8 seconds, a percentage that’s been on the rise since 2015, and the average reading time is 13.4 seconds, a 29% jump during the past 7 years.

However, if your emails aren’t optimized for display on mobile devices, your carefully crafted messages will likely be for naught: An email that doesn’t render correctly on a mobile device is likely to be deleted in 3 seconds or less, and up to 15% of recipients will simply unsubscribe in such a situation, according to Campaign Monitor.

With that in mind, here are 5 ways to ensure that your financial services emails are opened, read, and acted on by customers receiving them on mobile devices.

A responsive email template automatically adjusts to the recipient’s device when it’s opened, whether they’re on a desktop computer with a large display, an older generation smartphone with a small screen, or anything in between. People with plenty of display real estate won’t mind a non-responsive email template, but those on the other end of the spectrum likely won’t appreciate having to zoom in just to read your message.

If you can’t create a responsive email template just yet, then opt for a scalable template, which uses a single column with large text. It won’t look pretty on a large screen, but it will get the job done on mobile devices.

2. Use preheader (preview) text, but pay attention to the devices used by your subscribers

The text shown below the subject line on Apple Mail for iOS, Gmail for iOS and Android, and other mobile email clients is known as the preheader, or preview, text. If you don’t specify it, your customers will likely see the first several words from the email, which could be the alt-text from the header image, “Click here to view this email online,” or other non-useful information.

While your subject line shouldn’t be more than six words, or about 50 characters, you have a little more room with the preheader. Check your analytics and see which mobile email clients are more prevalent among your customers, since Apple Mail for iOS typically displays about twice the amount of preheader text as Gmail for mobile.

However, note that if your preheader text doesn’t fill the space provided by the recipient’s email app, it may pull in the first several words from the email to occupy the gap. To stop that from happening, check out the hack explained by Litmus – it adds white space after your preheader text to ensure that it’s all your customers see.

While mobile email reading times are on the rise, that 13.4-second average still isn’t much time to engage customers and get them to take action. Use short paragraphs that are just a sentence or two, with a few bullet points that convey key value props or other important information. Your fonts should be large enough to read on small screens – make sure you use ones that are broadly supported by the major email apps.

Don’t be afraid to use multiple CTA (call-to-action) buttons. You might want to include one in the middle, if your email is a little long, and don’t forget to make the buttons big enough that the user can easily tap them with a finger from the same hand holding their device. Your CTAs should complete the phrase “I want to…”, such as “Apply Now” or “Check My Account Balance.”

Keep your image file sizes down, since not everyone has access to fast download speeds and you don’t want to take up too much of their data plans. High-def images are perfect for logos and other key visuals, but the rest of the pictures can likely be lower-def and still look fine on a mobile screen. Make sure all of your images have alt-text, since many email clients turn off images by default.

This email from Paypal is a good example of a mobile-optimized message.

4. Consider when you send your emails

Litmus’s state of email engagement report also notes some differences in the best time to send email, depending on which platform is dominant among your customer base. This is important because if you send a message when your audience isn’t likely to be checking their email, your email could end up way down their inbox when they download their messages.

Litmus says the difference also depends on where your customers live:

5. Test your emails on a variety of mobile devices and optimize your landing pages, too

Even if you use a responsive email template, you’ll still want to test your messages on as many kinds of mobile devices and in as many apps as possible. There could be quirks in your code that might create issues.

In addition to making sure your links work, check their destinations on mobile too. Your landing pages should also use responsive design.

Deep links into specific places in an app are possible too – see this article in our Help Center to learn more.

Our new ebook, Email 101 for Financial Services, is designed to help financial services companies learn how to improve the ROI of their email operations. 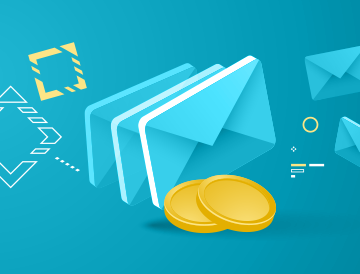 Learn about email security best practices that are absolutely vital to protecting the credibility of financial services businesses.